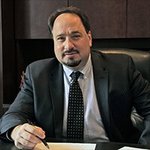 Dom soon realized his heart and true calling wasn't in prosecuting people, but in defending those who have been accused by the government of committing crimes. He joined his father and brother, both attorneys, and began his very successful legal career.

Over a decade ago, he partnered up with veteran prosecutor Patrick Weiland and formed The Law Offices of Dolci & Weiland. Combining their considerable talents and diverse backgrounds, Dom and Pat started what has gone on to be recognized as one of the premier litigation firms in the state.

Dom is a fighter; he enjoys and employs bare knuckled litigation in the court room. Whether taking a serious felony or DUI successfully to jury trial, or using his considerable experience to force an opponent to yield in a divorce or civil case, Dolci is found almost weekly in courthouses across the state on trial. His trial record compares favorably to almost any attorney in the state, either in the sheer volume of the cases he tries or in getting outstanding results for his clients.

When you hire Dolci & Weiland you can be assured that you are getting a team of true, experienced trial lawyers who will leave no stone unturned in working to achieve the goals you have for your case.