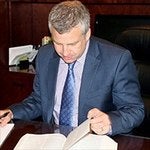 Prior to forming the Law Offices of Dolci & Weiland, Pat worked at DuPage County State's Attorney's Office for nearly 10 years, handling all types of felony, misdemeanor and traffic cases. As a misdemeanor Assistant State's Attorney, Pat was assigned to prosecute over 10,000 Driving while Under the Influence (DUI) cases.

While at the State's Attorney, Pat was also an instructor at Suburban Law Enforcement Academy and was a founder and creator of the Financial Identity Theft Task Force. Before leaving the State's Attorney's Office, Pat was a supervisor in the felony trial division with other attorneys reporting directly to him.